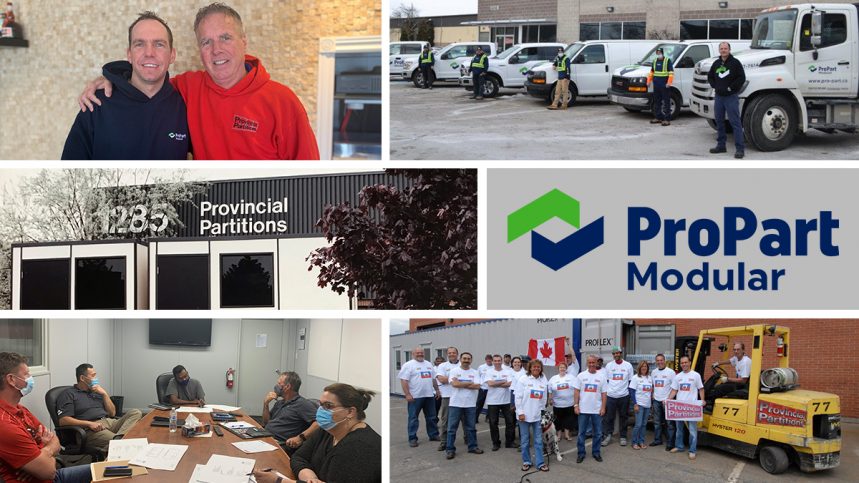 As we continue to celebrate ProPart Modular’s 40th anniversary, I’d like to take this opportunity to reflect on the last 40 years and look forward to what the future holds for ProPart Modular.

It all began in 1981 when my father Todd Frankland, the visionary, dropped out of college to pursue this new business. With the help of Marilyn, Al, and Adam Frankland, they set out to solve customer’s construction problems while allowing the flexibility for future change. At the time, the modular industry wasn’t well established, whereas today, anything can be modular including residential builds and hotels. ProPart Modular’s wall system was originally designed to be used for schools and underwent Fire Rating Testing and Sound Transmission testing to ensure quality for use in school applications.

ProPart Modular’s first project didn’t end up being for a school, though. That honor went to Northern Telecom, a multinational telecommunications and data networking equipment company. ProPart Modular helped build 10 heat rooms which were positively sealed enclosures. Northern Telecom would “burn in” the telephone switchgear system to test under high temperatures so they would function in the hottest regions without failure. These heat rooms also had halon fire protection, which is no longer used, and were leak concentration tested to ensure fire suppression would perform as intended.

Four decades later, we’ve had the privilege of working with a wide variety of customers and builds. Some of the more memorable ones that come to mind are the Audi mobile showroom and the work we’ve done for Pizza Pizza. Not only did ProPart Modular build a Pizza Pizza mobile shop for venues like the Canadian National Exhibition and London Fair, but included a triple stack oven producing more pizza than two locations combined. The mobile shop served over 1 million visitors, plus 28 tonnes of cooling for the kitchen and staff. None of this would be possible without the flexibility of our eco-friendly modular system which is completely re-usable, relocatable, and subsequently helps with eliminating waste and savings on future costs as changes arise.

For those who have connected with us in past years may remember our original name, Provincial Partitions. While we love our history, we felt our name was a little dated and misleading. In an effort to renew our brand so that it aligns with all that we do as well as our future goals, we rebranded to ProPart Modular. As we look towards the future, we’re dedicated to establishing new partners and serving individual markets. We’re going to move away from being just a construction company and set out to diversify and operate differently based on the problems we solve. No request will be too large or too small and we look forward to the trend towards modular construction. As many have discovered in the last year, especially during the pandemic, the ease, speed, and flexibility of modular construction can help eliminate potential risks.

This story, full of success, failures, and lessons learned, couldn’t have been made possible without the help of the ProPart Modular team – a team I view as family – and I’m excited to tackle all the new challenges and changes that we meet. “Change occurs so frequently” was our motto in the 80’s and it’s even more relevant today! Thank you to everyone who I’ve had the pleasure of working with, here’s to another 40 years of ProPart Modular.